RarePlanes is a unique open-source machine learning dataset that incorporates both real and synthetically generated satellite imagery from Maxar and AI.Reverie. More specifically, RarePlanes focuses on the value of synthetic data to aid computer vision algorithms in their ability to automatically detect aircraft and their attributes in satellite imagery. Although other synthetic/real combination datasets exist, RarePlanes is the first dataset built to test the value of synthetic data from an overhead perspective. Previous research has shown that synthetic data can reduce the amount of real training data needed and potentially improve performance for many tasks in the computer vision domain. The dataset is expansive, and the largest openly available dataset to date focused on aircraft in satellite imagery. The real portion of the dataset consists of 253 Maxar WorldView-3 satellite images spanning 112 locations with ~14,700 hand annotated aircraft. The accompanying synthetic dataset is generated via AI.Reverie’s simulation platform and features 50,000 synthetic satellite images with over 600,000 aircraft annotations. Both the real and synthetically generated aircraft feature 10 fine grain attributes including: aircraft length, wingspan, wing-shape, wing-position, FAA wingspan class, propulsion, number of engines, number of vertical-stabilizers, if it has canards, and aircraft role.

The RarePlanes dataset is available through the AWS Open-Data Program for free download.

To download the real training and testing tiles (~3 GB) execute these commands:

All real data (~107 GB) including both tiled and untiled formats can be downloaded using this command:

All synthetic data (~211 GB) including both tiled and untiled formats can be downloaded using this command:

All model weights (~3.8 GB) used in the experiments can be downloaded here:

All real data (geojson annotations and imagery) follow the same naming convention, with a corresponding annotation file for each imagery product:

The ‘Location ID’ is a unique integer value for each of the locations within RarePlanes. This value ranges between 1 and 130. Note that some locations have been removed with 112 unique values remaining.

The ‘CAT ID’ is a unique identifier for each Maxar WorldView 3 image strip. The dataset contains 253 unique image strips and CAT IDs.

The ‘extension’ will be one of the data types as listed above.

Each aircraft is labeled in a diamond style with annotators instructed to label the nose, left-wing, tail, and right-wing in order. This annotation style has the advantage of being simplistic, easily reproducible, convertible to a bounding box, and ensures that aircraft are consistently annotated as other formats can often lead to imprecise labeling. Furthermore, this annotation style enables us to pull out two valuable features of aircraft: Their length and wingspan.

For each annotation, individual features were labeled for each aircraft. Each feature is saved as an attribute in the geojson and coco annotations.

wing_type: (str) Wing type or shape is one of the most important features for distinguishing types of aircraft. We ultimately break wing shapes into four categories including: ‘straight’, ‘swept-back’, ‘delta’, and ‘variable-sweep’.

wing_postion: (str) We asked annotators to label if wings were ‘high mounted ’or ‘mid/low mounted’. Annotators ultimately struggled with this exercise, with a lack of consistent agreement across the dataset. This task is certainly challenging from an orbital perspective. These labels remain in the dataset, however their overall value may be partially limited.

num_engines: (int) We label the number of engines that a plane possesses. This is an integer value that ranges from 0 to 4.

propulsion: (str) We label the type of propulsion. For our dataset we label ‘propeller’ engines, ‘jet’ engines, and ‘unpowered’ aircraft.

canards: (str) These features are small forewings that are typical of a few military aircraft and even fewer civil aircraft. Canard’s are typically added to planes to increase maneuverability or reduce the load/airflow on the main wing. Canards are labeled in a binary fashion: ‘Yes’ or ‘No’.

num_tail_fins: (int) We label the number of vertical stabilizers that a plane possesses. This is an integer value that ranges from 1 to 2 in the dataset.

length: (float) As stated earlier, length estimates can be derived from the diamond annotation. We provide the length estimate in meters for each aircraft in floating point format.

wingspan: (float) We can also extract wingspan from our diamond annotation labels.We provide the wingspan estimate in meters for each aircraft in floating point format.

faa_wingspan_class: (int) Using this we can then classify aircraft by their FAA Aircraft Design Group Wingspan Class. These classes fall into six (1 to 6) categories and the wider a plane is, the longer and wider a runway it requires to land. This is important for identifying what planes could potentially land at certain airfields. We also use this to classify the size of certain aircraft (see role).

area: (float) The total area of each annotation (meters²).

See the Role_Counts.csv for types and numbers of each contained within the dataset.

loc_id: (int) The unique identifier for each RarePlanes airfield location.

location: (str) The string text of the geolocation automatically derived from geopy geocoders. Further georeferencing location information can be found within the metadata.csv.

partialDec: (float) (Tiled Data Only) A floating point value between 0 and 1 indicating the proportion of a plane that was cropped. The lower the value, the more of the plane has been cropped. End users may want to use this to remove annotations that now display only a small percentage of an aircraft. We recommend removing any annotations with a value <0.25.

truncated: (int) (Tiled Data Only) A binary integer value of 1 or 0. A value of 1 indicates the annotation was cropped during the tiling process.

We provide an example training and testing split. End-users certainly can use this split but are encouraged to reorganize and create their own splits for their specific research or use-case(s).

How we split the data:

A “location” is the physical spot on earth, an “observation” is a single satellite image at any given location. Often, there are multiple observations per location. Approximately 75% of the dataset is included in the example training dataset with the remaining 25% for testing.

1.We first stratify airfields by country, a minimum of 1 image goes in train and 1 in test. If that is not possible for countries with a single location and single observation, that image goes into training.

4. A few images are manually switched between the training and testing set to ensure that certain roles of aircraft are evenly represented.

loc_id: (int) The unique identifier for each RarePlanes airfield location.

Country: (str) The country of the airfield in question.

State_Province: (str) The state, province, or other administrative district for each air field.

sensor: (str) The sensor, in this case all data is from WorldView 3, shortened to ‘WV03’.

collection_time_start: (datetime) The start time and date for imagery collection.

cloud_cover_percentage: (int) The estimated percentage of cloud cover for the entire image strip. Note that this is for a much larger area beyond the extent of each airfield. These numbers will not be accurate for individual airfields.

scan_direction: (str) The direction in which the sensor operated for collection. ‘Forward’ or ‘Reverse’.

RarePlanes contains three types of imagery products. All imagery is derived from the Maxar WorldView-3 sensor. Note that no SWIR imagery is included. All data are ortho-rectified and atmospherically corrected to surface reflectance units (surface reflectance *10,000). PS-RGB imagery has undergone dynamic range adjustment (DRA) for conversion to 8-bit imagery.

Note that many locations have multiple images. When working with the dataset ensure you use both the loc_id and the image_id to select the appropriate annotations for the corresponding image.

Weather is visually interpreted for each image.

‘Clear Skies’- No observable clouds or haze over the airfield.

‘Snow’- At least ≥50% of the surface of the airfield is covered in snow.

‘Cloud Cover or Haze’- Any image that contains observable cloud cover or haze. 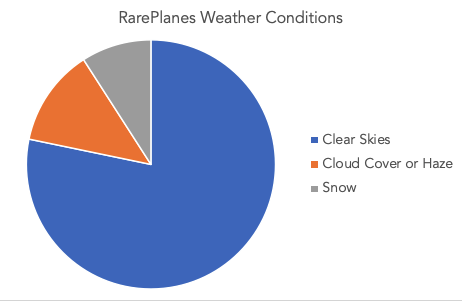 All synthetic data is created via the AI.Reverie simulator software. The synthetic datasets 50,000 images across 15 distinct locations, simulating a total area of 9331.2 km^2 containing 629,551 annotations of aircraft. The locations were selected based on available OpenStreetMap data. Each image features a simulated GSD of 0.3 meters and is collected from variable look-angles ranging between 5.0 to 30.0 degrees off-nadir. The imagery is evenly split across 5 distinct biomes including: `Alpine’, `Arctic’, `Temperate Evergreen Forests’, `Grasslands’, and `Tundra’. The biome parameter controls the type of vegetation, its density as well as the ground textures. Four unique weather conditions are also evenly distributed across the dataset including: `Overcast’, `Clear Sky’, `Snow’, and `Rain’. Other parameters includes the sunlight intensity, the time of the day or the off-nadir angle. Ultimately, this produces an expansive heterogeneous dataset with a wide variety of backgrounds. We believe that this dataset will be helpful in improving model generalizability to new areas and developing new algorithmic approaches that could move beyond aircraft detection.

[1] All aircraft sketches are attributable to Wikipedia user Steelpillow: https://commons.wikimedia.org/wiki/User:Steelpillow/Aircraft