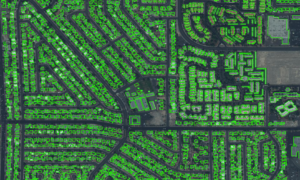 In building off of the results and lessons learned from SpaceNet 1, CosmiQ and the SpaceNet Partners decided to launch a second public data science challenge focused again on automated building footprint extraction from high resolution satellite imagery. While it used the same evaluation metric from the previous challenge, SpaceNet 2 included an expanded dataset featuring four new cities, Paris, France, Shanghai, China, Khartoum, Sudan, and Las Vegas, Nevada, at a higher resolution than SpaceNet 1 — 30cm ground sample distance collected by DigitalGlobe’s Worldview 3 satellite. The new dataset contained over 300,000 manually curated building footprint features across the four cities. The challenge was conducted from July 2017 to August 2017 and hosted on the TopCoder platform. The code for the top three submissions were open sourced under the Apache 2 License on SpaceNet Github repository.

CosmiQ Works conducted this project in coordination with the other SpaceNet Partners: Radiant Solutions, Amazon Web Services, and NVIDIA.