Within the broader computer vision community, the issue of dataset size has received surprisingly little attention. Most analyses simply use all available data and focus on model architecture, with scant attention given to whether the dataset size is appropriate for the task and architecture’s complexity.

Many different variables determine the ultimate mission impact of satellite imagery, a concept CosmiQ has referred to as the Satellite Utility Manifold. Previous CosmiQ studies have explored such variables as sensor resolution (0.3 meter to 2.4 meter), super-resolution techniques, and the number of imaging bands (grayscale versus multispectral).

Expanding on this work, the Machine Learning Robustness Study focuses on training dataset size and diversity on building detection performance in the SpaceNet data. The recent availability of this extensive dataset and model-building capability will make it possible to address dependence on geography and dataset size at the leading edge of geospatial machine learning.

This trade study strived to answer these foundational questions: 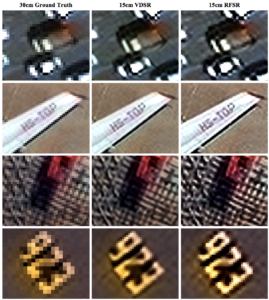 Our results showed that the application of SR techniques as a pre-processing step provided a statistically significant improvement in object detection performance in the finest resolutions.  For both object detection frameworks, the greatest benefit is achieved at the highest resolutions, as super-resolving native 30 cm imagery to 15 cm yields a 13−36% improvement in mean average precision. Furthermore, when using YOLT, we find that enhancing imagery from 60 cm to 15 cm provides a significant boost in performance over both the native 30 cm imagery (+13%) and native 60 cm imagery (+20%).

Rapid detection of small objects over large areas remains one of the principal drivers of interest in satellite imagery analytics. This project sought to build off our previous work with the You Only Look Twice (YOLT) algorithm, which modified YOLO to rapidly analyze images of arbitrary size, and improves performance on small, densely packed objects.

Since YOLO is just one of many advanced object detection frameworks, however, and algorithms such as SSD, Faster R-CNN, and R-FCN merit investigation against geospatial applications as well, CosmiQ developed the Satellite Imagery Multiscale Rapid Detection with Windowed Networks (SIMRDWN) framework. SIMRDWN (phonetically: [SIM-er] [doun]) combined the scalable code base of YOLT with the TensorFlow Object Detection API, allowing end users to select a vast array of architectures to apply towards bounding box detection of objects in overhead imagery.

Can mapping be automated from off-nadir imagery?

In many time-sensitive applications, such as humanitarian response operations, overhead imagery is often taken “off-nadir” – that is, not from directly overhead – particularly immediately following an event or in other urgent collection contexts. Despite significant advances in using machine learning and computer vision to automate detection of objects like automobiles, aircraft, and vehicles in overhead imagery, no one had tested if the approaches would work on off-nadir images. CosmiQ led the SpaceNet 4 Challenge which asked participants to develop machine learning algorithms to identify buildings in images from the new SpaceNet Atlanta Off-Nadir Dataset. The dataset comprises 27 distinct images over Atlanta, GA taken during a single overhead pass of the DigitalGlobe WorldView-2 satellite. These images range from 7º (nearly directly overhead) to 54º off-nadir (very off-angle and consistent with urgent collection data) to include both North and South-facing views. Alongside the imagery we released building labels for the same 665 km2 area covered by the imagery. Shadows, distortion, and resolution vary dramatically across these images, presenting a complete picture of the challenges posed by off-nadir imagery.

Nearly 250 competitors registered for the two-month challenge, and the winners improved baseline performance by about 40%. Once the challenge was completed, we performed a deep dive into their solutions to determine how their algorithms optimized building footprint extraction from off-nadir images, where they failed, and where future research should focus to address this difficult task. Results from these analyses can be found in our blog posts and published papers.

Emerging technical and business trends in the commercial satellite communication (“satcom”) market could impact how both commercial and governmental institutions use and invest in space-based communications services in the coming years. Historically, the relatively staid nature of the commercial satcom market has allowed for public and private sector organizations alike to plan for and acquire communications services years in advance. This consistency and development pace has been essential for a majority of the stakeholders involved ranging from regulators, financial institutions, and manufacturers. Looking ahead, commercial satcom operators in geostationary orbit (GSO) and non-geostationary orbit (NGSO), as well as their associated resellers, will likely experience some difficulty maintaining an equivalent level of service stability (and predictability) due to the following market trends:

These market changes present both challenges and opportunities for leaders in the public and private sector, and this project sought unpack some of these market trends and make several recommendations to market stakeholders.

A Software Package to Facilitate Time-Series Analysis of Satellite Imagery

Comet Time Series (CometTS) is a software package and tool that enables workflows for the analysis and visualization of a time series of satellite imagery for the data science and geographic science communities. The tool aims to enable population estimation research, land use change detection, or natural disaster monitoring using a range of data types. CometTS calculates relevant statistical quantities (e.g., measures of central tendency and variation) and provides a visualization of their changes over time. The package can help to serve as a rapid inspection workflow and analyze multiple regions of interest (ROI)’s in seconds.

CometTS has been employed to monitor electrical and infrastructure recovery in Puerto Rico following Hurricane Maria. For this study, the tool was used to extract the change in average nighttime brightness for all census tracts within Puerto Rico and to infer the number of persons without power over time. Multiple opportunities exist to employ CometTS for impactful work in the future including:

Visualizations and analyses derived from CometTS in these topics can inform better understanding of changes to climate, poverty, food security, biodiversity, political conflict, and civil instability.

A visualization of mean observed brightness before and after Hurricane Maria in the San Juan Municipio, Puerto Rico. The linear regression forecast, and seasonal adjusted forecast are plotted in teal and orange respectively. Differences of observed vs. expected brightness can be visualized and quantified.